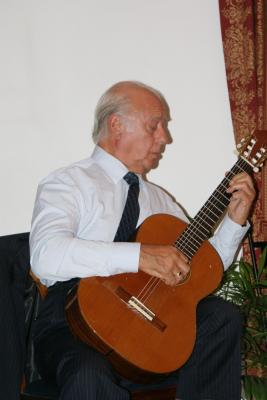 Raul Maldonado is born in 1937, at Maria Susana, a little village lost in the middle of the Pampa Argentine, in the provincia of SANTA FE. He comes from an old creole family deep-rooted to the country since a lot of generations. From his young childhood, his love for music led him to escape by hiding  to go and listen to the old peasants who were playing on their guitar the ancient gauchos' stories.

Young witness of daily creation of common man, man from Pampa, he feels born in him  the passion for guitar and for popular music tied to his country. When he was ten years old, this passion led him to make a fortune instrument with tennis racquet, it has been his first guitar.

At 12 years old, he follows his parents to ROSARIO, great industrial town of ARGENTINE where he finished Highschool studies and begin Medecine ones , in order to follow family tradition.

By that time, he met the famous well-known argentines guitarists Graciela POMPONIO and Jorge MARTINEZ-ZARATE and gives up his medecine studies to devote himself , under the tutelage of his masters, to musical studies at " EL INSTITUTO DE MUSICA DE LA UNIVERSIDAD NACIONAL DEL LITORAL". He has been following a classical training for eight years without losing sight the evolution of Argentine folklore. That's perfection search as well a permanent musical concern which lead him to come in FRANCE, first time in 1962  then a second one in 1965.

As a performer, he is produced in many european countries and participates in several festivals, the most important are the one of AVIGNON, of CORSE, of QUERCY BLANC, of AIX EN PROVENCE, PARIS International Festival,  RELIGIOUS MUSIC Festival  , of STOCKHOLM, of FRIBOURG , of SPOLETO, of LUXEMBOURG, of BUENOS AIRES(Guitarras Del Mundo, Guitarras En Concierto), HISPANOAMERICAN GUITAR Festival in BEYROUTH .

In addition to his activities as a performer and a composer, he leads an intense educational activity in several conservatory in Paris surroundings.CAP holder since 1989, he was appointed the same year at the direction of a Preparation Centre for Educational Events of Aptitudes.- Certificates In 1998, he was project leader in Inspection Municipal Conservatory of the city of Paris.

As a composer, it offers us numerous works inspired by South American folklore, see CATALOGUE OF WORKS.

His works have been played by some of the most famous  currents Guitarists ;

Many other artists, all over the world, have recorded too the works of Raul MALDONADO ( see folder CD / INTERPRETES )